Camp Simcha to say ‘Yes’ to new group of families 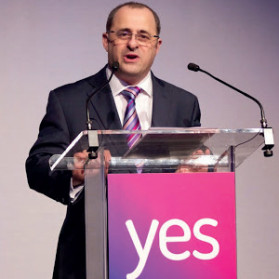 Camp Simcha’s 20th anniversary dinner marked the launch of an extension of services to support a new group of families coping with serious childhood illnesses.

More than 1,110 guests at London’s Grosvenor House raised £1.7million to help fund existing services, as well as this new group, which will see families with children suffering from serious, life-changing diseases such as Type 1 Diabetes, Crohn’s and some rare, genetic disorders, now having access to Camp Simcha’s support.

It is hoped that within the next three years this expansion could see as many as 500 more family members benefitting from the charity’s range of 24/7 practical and emotional support services.

Chief executive Neville Goldschneider explained: ‘This new group we will be helping in addition to those we already support, are coping with conditions which can have a devastating impact on a child’s quality of life, affecting the whole family. The support of our generous donors means we can now say ‘Yes’ to all these families.’

The evening also saw a tribute and presentation to Meir and Rachely Plancey, who founded Camp Simcha 20 years ago and still devote so much of their daily lives to it.

Making the presentation trustee Hershy Stimler, whose own son was supported by Camp Simcha when he was diagnosed with leukaemia 14 years ago, said: ‘After 20 years of tireless work, Rachely now leads a team of 12 Family Liaison Officers supporting families across the country and Meir, as a trustee, continues to guide and inspire the whole team on a daily basis.’

The couple were presented with a book filled with memories and messages from parents who have been supported by Camp Simcha.

Guest speaker was Shadow Health Minister Luciana Berger, also spoke about the vital work the charity does and the incredible support the Jewish community shows to those who are suffering.

‘In 20 years we have seen so much change…but some things remain eternal, the solidarity of the community for families affected by cancer and life threatening conditions. Here’s to the next 20 years of Camp Simcha because if Camp Simcha did not exist we would have to create it.’

Mr Goldschneider said afterwards: ‘The evening was a huge success. As we celebrate 20 years of Camp Simcha and look back on how far the charity has come, I am delighted to have welcomed so many new people to the dinner as well as all our existing supporters, who all enable us to go on making that critical difference.’