Our Together Again Dinner 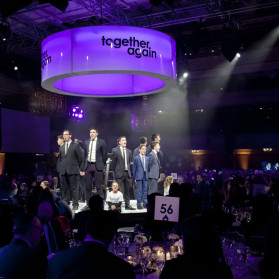 We held our biennial London Dinner at the Grosvenor House on March 6th. At the dinner, Lee Bladon’s  moving testimony of the support Camp Simcha gave his family during his daughter’s short life helped us to raise £2million.

Lee Bladon, who appeared in the dinner film two years ago with his wife Sam and daughter Evie told guests: ‘Sadly our beautiful girl lost her battle in November 2015.’ Evie was deprived of oxygen at birth resulting in severe brain damage and multiple resulting medical issues. ‘She had fought so bravely for three years but her little body just couldn’t fight any longer against the terrible cocktail of medical problems she had to face daily throughout her life, said Lee. ‘When Evie was born we felt our lives were shattered but Camp Simcha are unique in their ability to help you put your lives back together again. I can tell you without hesitation, that none of us would have coped in these last few years without Camp Simcha. They were there for each of us every step of the way.’

More than 1,000 guests at the Grosvenor House Hotel also heard about Camp Simcha’s partnership with Noah’s Ark Children’s Hospice, forging the way for paediatric hospice-care to be available for all Jewish children in north London for the first time.

Other highlights of the dinner included an aerial high rise act and a silent auction which raised £ 180,000, and included the sale of works of art created by children participating in the charity’s Arts at Home programme.

Lucy, aged 10, and Joshua, 8, both created their own paintings for the auction. Lucy, who was born with an extremely rare brain tumour which results in daily seizures and multiple lifelong endocrine issues, said creating art with Belinda makes her feel ‘free’ and so she chose to create a graffiti-style painting around this theme. Joshua, who is just over a year into his treatment for Acute Lymphoblastic Leukaemia (ALL) has an incredible knowledge of the underwater world so he painted an underwater hospital, characterising the different doctors and
nurses in his life as different fish and sea mammals.

Camp Simcha’s art teacher Belinda Glyn told dinner guests: ‘Over the last three months I have been working with the children each creating a magnificent painting. I feel that the results they have come up with are a true testament, not only to themselves, but to every Camp Simcha child’s piece of artwork over the past seven years within the Arts at Home Programme.’