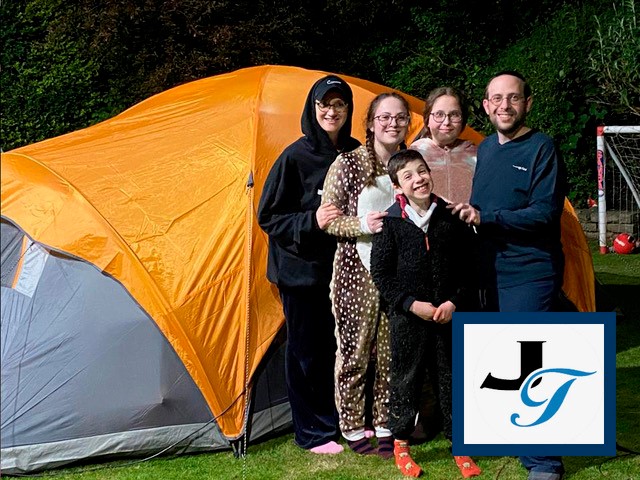 Lockdown has given one Manchester Family the opportunity to have the camping adventure they have always wanted – while raising over £870 for Camp Simcha.

The Issler family, from Broughton Park, were one of six Manchester families who took part in the charity’s recent fundraising event, Camp In 4 Camp Simcha – except they decided to camp out, purchasing a new tent just three days beforehand for their big night.

The family are long-time supporters of the charity, which helps families with seriously ill children, offering a wide range of bespoke practical, therapeutic and emotional services. Mum Sara Issler works as a volunteer – prior to lockdown she was visiting a Manchester Camp Simcha family weekly to do fun activities with two of the children – giving them some extra attention and respite for their parents.

Sara’s husband Lez was also part of a group which trekked through Yosemite to raise funds for the charity a few years back, and Lez’s sister Brocha is a devoted and long-standing volunteer who arranges parties for the children the charity supports in Manchester.

“Taking part in the fundraising camping night felt like a great way for me to keep supporting Camp Simcha in its work, while giving my kids something fun to do,” says Sara.

However, her children, Rikki, 16, Penina, 13, and Yehuda, nine, were insistent that they should camp outdoors rather than inside!

“Lez took quite a bit of persuading but in the end he joined us as well, along with our dog Milo. It was absolutely freezing but it was also a lot of fun and the children absolutely loved the experience. They want to do it again this weekend!

“We are trying very hard to make sure they take some positive memories out of this lockdown time and the camping was absolutely one of them, as was the build-up. My youngest was checking our fundraising page every 10 minutes. They all know about the work Camp Simcha does – because of what I do each week and also their aunt’s work with the charity for so many years.

“With the situation now, I cannot be there offering face-to-face support to my Camp Simcha family although I am constantly in touch with them on the phone,” said Sara. “As I lay awake in the cold during the camping night, contemplating going inside, I thought of the kids I support and their parents and how tough things are for them right now and it motivated me to stay outside.”

The Camp Simcha team have been working overtime to find creative and effective ways to keep helping the very vulnerable families the charity supports during the COVID-19 emergency.

Camp Simcha Head of Services Daniel Gillis says: “While many of our practical services such as hospital transports, crisis meals and night-time respite care have continued, albeit with extra safety precautions, our Family Liaison Officers, arts therapists and counsellors, have been maintaining support for our families on the phone and using virtual communications. We are also sending in a steady stream of fun activities in for the children. From creative toys, games and crafts, to seed and herb garden kits for inside and out, these are a real boost to families, many of whom have very vulnerable children and need to feel our support more than ever now.

“We really appreciate the fantastic fundraising effort of the Isslers and all the families who took part in Camp In 4 Camp Simcha.”

Here’s how the article appeared in the Jewish telegraph 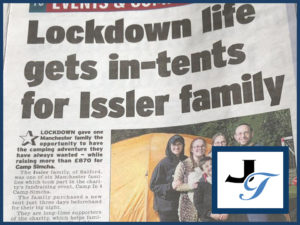