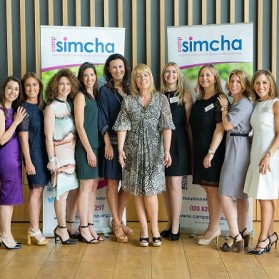 The event organised by a committee, led by former Camp Simcha parent Rachael Pollock, was to raise awareness and funds for the charity’s work supporting UK families coping with serious childhood illness.

Rachael and her family were supported by the charity for four years after her son Adam, now 11 was diagnosed with Acute Lymphoblastic Leukaemia in 2010.

She said: ‘Camp Simcha is a very special and unique charity because as well as providing support services for families who have children with serious or life threatening illnesses, it does something amazing – it brings joy to those children when they are suffering and, also, to their brothers, sisters and parents.

‘I have first-hand experience of the Camp Simcha phenomenon, in the form of the wonderful staff and volunteers, the away days and all the fun and games which brightened up my son’s life when he was ill as well as relief they brought for the rest of the family. The committee decided to hold this event to raise awareness of the important work which Camp Simcha does and of the urgent need to continue to raise funds and support so that Camp Simcha can bring more joy to the many children who are suffering, and their families who, sadly, need their help.’

During a question and answer session, actress Fay Ripley, who has recently published her third cook book, entertained guests with stories about her time on the hit comedy drama Cold Feet, as well as her thoughts on creating healthy, imaginative meals for the family.

She said she was honoured and happy to be part of an event to support such a ‘genuinely amazing charity – one which is regarded as something very special by all those who know it’.

Asked about her links with Jewish community, Fay, described herself as ‘Jewish’, explaining: ‘I always wanted to be Jewish, it’s as simple as that… I lived above Boots in Golders Green high street in my 20s, had naturally dark hair so I looked quite Jewish and I worked on the reception at CoCos. I also had my nails and hair done every week and I would buy challah on a Friday and the Jewish mums would spot I didn’t have a ring on my finger. I quickly realised this was how I was going to get a boyfriend!

‘After that I watched the film Yentl on a loop and received lots of invites for Friday night dinners until the truth came out!’

Chief executive of Camp Simcha Neville Goldschneider said: ‘We are thrilled to have set a new tradition with this Ladies’ Brunch. Rachael and her incredible committee have done a wonderful job and we are so grateful to them. Rachael knows how life-changing Camp Simcha’s support can be to families at the toughest of times and this fantastic event helps us to continue making that difference.’