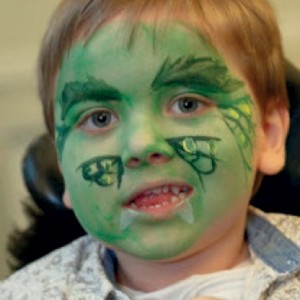 The UK charity took some 350 people on two 3-day family retreats in the UK – one in Oxford and one in Colchester this month.

Nine-year-old Cherry Tucker from Leeds, who suffered from liver failure in 2014 and then developed Children’s interstitial lung disease months later, was on retreat with her parents and three younger siblings.

Her mum Zoe, said: ‘It is our only stress-free opportunity to get away and do wonderful activities as a family. For 72 hours the children are being told ‘yes’ all the time, all day whatever the question, the answer from Camp Simcha is ‘yes’.

‘It’s the same for all the children, the siblings as well as the child who is ill. When you have a sick child, they always have to come first, but at retreat all the children are made to feel equally special.

‘We went to retreat for the first time last year and I was really nervous. Activities and outings that well children take in their stride can be too much for Cherry and as her parents we want to protect her from that risk. However, on retreat when there is an outing, you think ‘it’s fine, there’s a doctor going’.

‘The volunteers are wonderful too, so amazing with all the children. They have so much energy and an ability to perk the kids up and give them back some of that energy they have lost as a result of their illness.’

Chief executive of Camp Simcha Neville Goldschneider said: ‘Retreats give our families the opportunity to spend time together in an environment where everyone feels special but not different, while getting support from others who share similar daily battles.’

As Zoe explained: ‘It’s like being part of a special club. No one really wants to be in in but you cannot be without it. Camp Simcha is a lifeline.’