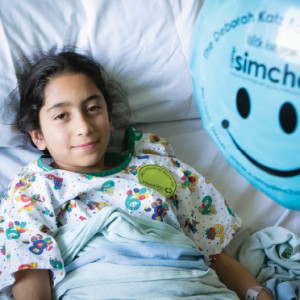 Captain Calamity, Science Boffins, the Happy Puzzle Company and a special visit from the Mr Men were just some of the highlights of a four-day Camp Simcha retreat for families with seriously ill children.

For many of those supported by the UK-based charity, retreat is the highlight of their year.

Nine-year-old Refoel Moshe Simcha, from Manchester, who suffers from a complex medical condition which affects his heart and other areas of his health, is one of them.

Mum Sara says: ‘Refoel Moshe Simcha is in hospital a lot and these four days we spend away with Camp Simcha give him something to focus on and look forward to,’ says Sara. ‘He counts down the months and weeks to retreat and then relives it for weeks after.

Along with their other children Shulamis, 19, Akiva, 14, Avrohom, 11 and Mordechai, 4, Refoel Moshe Simcha and his parents were among 152 family members from London and Manchester who joined Camp Simcha at the retreat in Daventry, Northamptonshire, this month.

The charity, which supports families in the Jewish community, coping with serious childhood illness, runs four retreats annually, on top of all the day to day practical and emotional support services it offers.

Sara says: ‘We have been to several Camp Simcha retreats and each one is just incredible – all the amazing treats and activities for the kids. I don’t know how but just when you think it cannot get better they pull something fantastic out the bag that the kids are talking about for weeks after.’

Just as importantly, Camp Simcha retreat gives parents time to relax and unwind while their children are having fun, with all their medical needs catered for. It is also a chance to get counsel from experts and speak to other families who understand what they are going through.

‘For our other children it’s not only an opportunity for them to get spoilt and feel special, it is also a rare time for us to be together as a family,’ says Sara.

‘Refoel’s procedures and hospital admissions are all over the country so we are frequently away. The other children hate that we are always away and they miss out on that time with us which I find really hard.  I also think it helps Refoel Moshe Simcha and his siblings to see there are others in the same situation as us, that they are not the only ones.’

Other activities during the weekend included pirates and fairies parties, circus entertainment, music from the Rafi Pinnick Band and Schmeichel, outings to the Snozone and Bounce, candlelit dinner for parents and supportive group and one-to-one talks with expert and inspirational speaker for families of a children with disabilities or illnesses Rabbi Baruch Rabinowitz.

Chief executive of Camp Simcha Neville Goldschneider said: ‘Retreats are a really important part of Camp Simcha’s services. While the day to day support is a vital lifeline to help families keep their heads above water in the most difficult of circumstances, retreats are a chance for them to be together in an environment where they feel secure, where they can recharge their batteries and leave feeling a little less stressed and stronger than they did on arrival.

‘The impact and the benefits last way beyond the few days they spend away with us and we are grateful to all our supporters, staff and volunteers who help make retreats happen.’