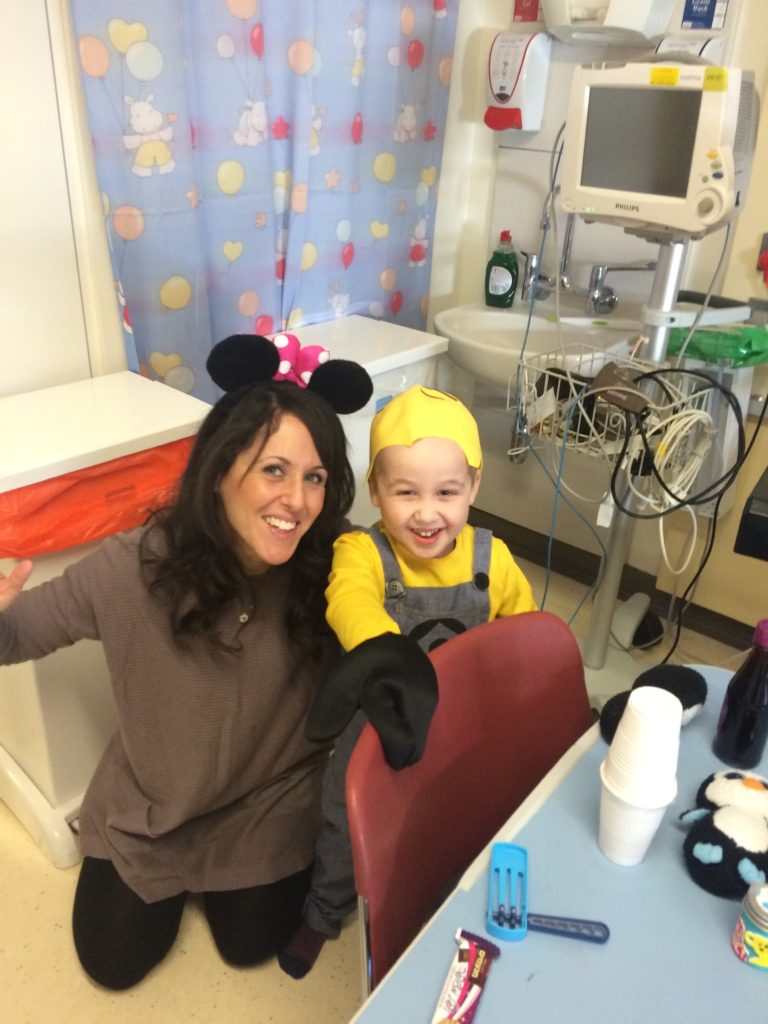 We have been so thrilled with the response this week to the launch of our new project The Care Necessities and are delighted to have raised enough money to create our first 20 care packages. I wanted to end the week by giving a bit more background as to why we wanted to set the project up.

Next month it will be two and half years since my son Samuel finished his treatment for Acute Lymphoblastic Leukaemia.

The terrible shock of his diagnosis and all the emotions that go with that; watching your child go through a gruelling treatment regime when he should be running around a school playground – and all the practical and emotional difficulties which go with having a seriously ill child, meant his four years of treatment was a very hard and frightening time for us all.

We were fortunate to have Camp Simcha by our side throughout – supporting us in so many ways including our family liaison officer, household support, art therapy, volunteers, sibling support, outings, retreats and so much more. Now as we gratefully move on with our lives, we want to work with Camp Simcha to help others in our situation.

This is why we are fundraising for a project we have created with Camp Simcha, called The Care Necessities, to provide parents with a case full of necessities, and some bespoke home comforts, to see them through their first few weeks in hospital following a child’s cancer diagnosis.

Samuel was just four when he got ill. We were on holiday in Spain at the time and he started complaining of excruciating pain in his back. Samuel never complains so we called an emergency doctor, who diagnosed him with a virus. But when we returned home Samuel was still very pale, with no energy and had started limping. I knew this wasn’t right. After initial tests, Samuel was asked to come in for further blood tests. On that visit he was diagnosed with Acute Lymphoblastic Leukaemia (ALL) and admitted to Great Ormond Street Hospital immediately.

He didn’t leave hospital for another three weeks, which we were told was the minimum time his initial treatment would take. For many families it is longer if there are complications or infections.

I remember, on the day of the second blood test, I had packed a kindle in my bag and a couple of other bits and that was it. I had not for a minute expected Samuel to be admitted.

Our world had fallen apart; there was so much to take in and we were totally devastated. Amidst all of that, my mum – who had been looking after my daughter Ella while we went for the blood tests, was running around my house going through drawers and cupboards trying to work out what we would all need to stay at hospital. It was the last thing she or we could focus on.

We spoke to a lot of other parents while Samuel was in GOSH and the Camp Simcha Care Necessities project was really born from that. We were fortunate to have family and friends who ran and got us everything we needed at the start, but not everyone there had that kind of support network. I remember thinking how much harder that must make it – and what if you are a single parent in that position, admitted to hospital with no warning. You are not going to leave your very ill child and pop to the shops.

We decided we wanted to fundraise to help parents like us at GOSH. Working with the team at Camp Simcha, we have put a lot of thought into what should go into the suitcase – and I also sent surveys out on various forums to get other views.

The aim is to bring some of their familiar home comforts to the hospital, as well as the necessities. It will have nice, cosy pyjamas and fluffy slippers – not disposable ones; toiletries that should last for a few weeks, healthy snacks, and other bespoke provisions.

I particularly wanted to include a fleece blanket – Samuel and I were both given blankets while he was in hospital and it was so comforting. Every time he came out of an anaesthetic for a lumbar puncture, I would make sure it was there waiting for him and he would sleep with it at night too. It made the bed feel more homely.

We also thought everything should be in a suitcase because we had a suitcase packed and ready in our bedroom for four years; when Samuel came in with a temperature in the middle of the night, we would literally pick it up and rush to the hospital.

The cancer journey is a long and difficult one. I hope The Care Necessities project will help alleviate one of the early practical stresses for parents who unfortunately find themselves in this position.

To donate to The Care Necessities go to www.campsimcha.org.uk/carenecessities